November 25, 2020December 9, 2020 Joe Barnett
This week was a big week for the ‘Cats as they went to Orlando and knocked off the Knights in the Bounce House 36-33 and then got some huge news from the College Football Playoff selection committee.  Also, with this week’s cancellation against Temple they’ve punched their ticket to the AAC Championship Game on 12/19.
Upsetting the Apple Cart 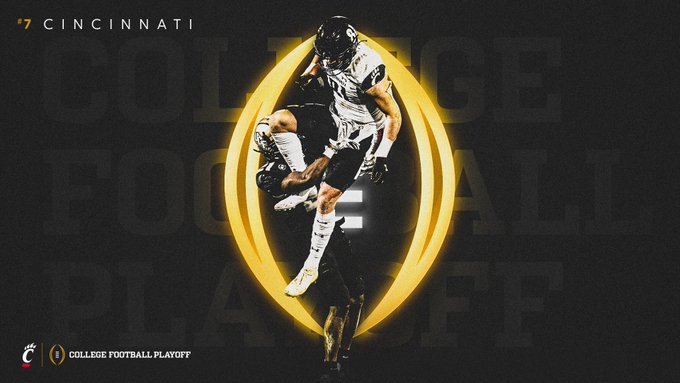 The Bearcats made College Football Playoff History coming into the first week rankings with the highest ever for a non “Power 5” school.  The Bearcats #7 ranking is higher than UCF finished in 2018, when they came in 8th.  They’ll need some help down the stretch from the teams in front of them in order to sneak into the Playoff for the first time.  The bright side, the #7 team in the first rankings has made it to the playoff two out of six times.  The Bearcats need to continue to handle their business and hope for some losses in front of them to sneak in.  They have one more match-up left against #25 Tulsa before likely another game against Tulsa for the American Championship. 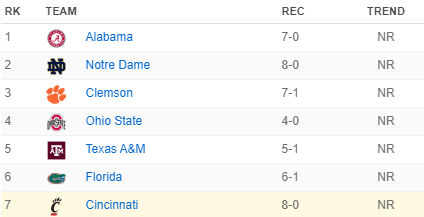 (Credit to Twitter user Captain_Cincy)
Our boys in black walked into the Bounce House and immediately took a critical blow from the Knights in the first quarter, going down 14-3 courtesy of an uncalled Fair Catch Interference penalty by UCF, which gave them the ball on their own 22 yard line and led to a quick TD from the Knights.
Another dropped punt by Ryan Montgomery would have spelled disaster for the Cats, but Sophomore CB Justin Harris dove on the ball and prevented the Knights from having another short field.
The Cats and Knights went back and forth until halfway through the fourth quarter when TE Leonard Taylor caught a 7 yard TD pass from QB Desmond Ridder to go up 36-25.  The Knights answered with a 10 yard TD and 2 point conversion to make it 36-33.  The Bearcats managed to drive the ball down to the red zone when a controversial call by Fickell and the Bearcats to not go for the TD and instead to take a knee on the 1 yard line with 1:34 on the game clock.  The Bearcats tried for the TD two more times before an absolutely terrifying fumble on the 1 yard line which if UCF would have recovered, likely would have cost the game.  The Bearcats escaped with a 3 point victory on the road and ultimately punched their ticket to their second consecutive Conference Championship Game. 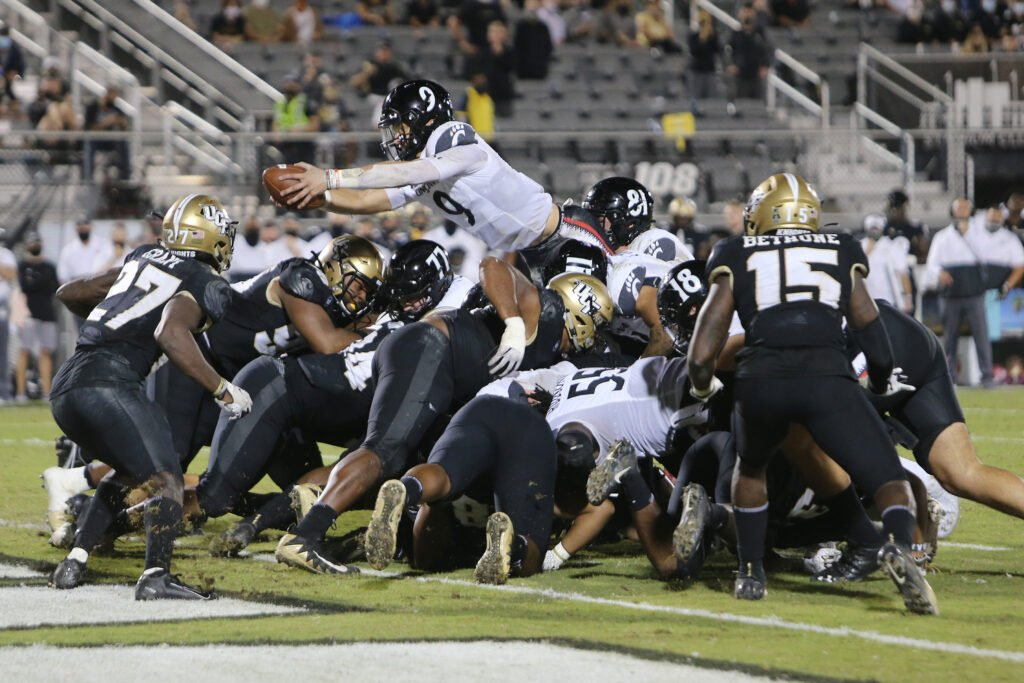 UCF sold out on the run in the first half, mostly shutting down the Bearcats running game, but keeping the passing game wide open for the Cats.  Desmond Ridder went for a career high 338 yards and 2 TDs on 21-32 passing while the Bearcats defense held Dillon Gabriel to 243 yards, 3 TDs, and an untimely turnover.  Ridder also rushed for 57 yards and two more touchdowns on the ground.
The Bearcats TE were the stars of the game, with 11 receptions, 157 yards and 2 TDs between Josh Whyle and Leonard Taylor.  Both of these guys are likely NFL players in the future. 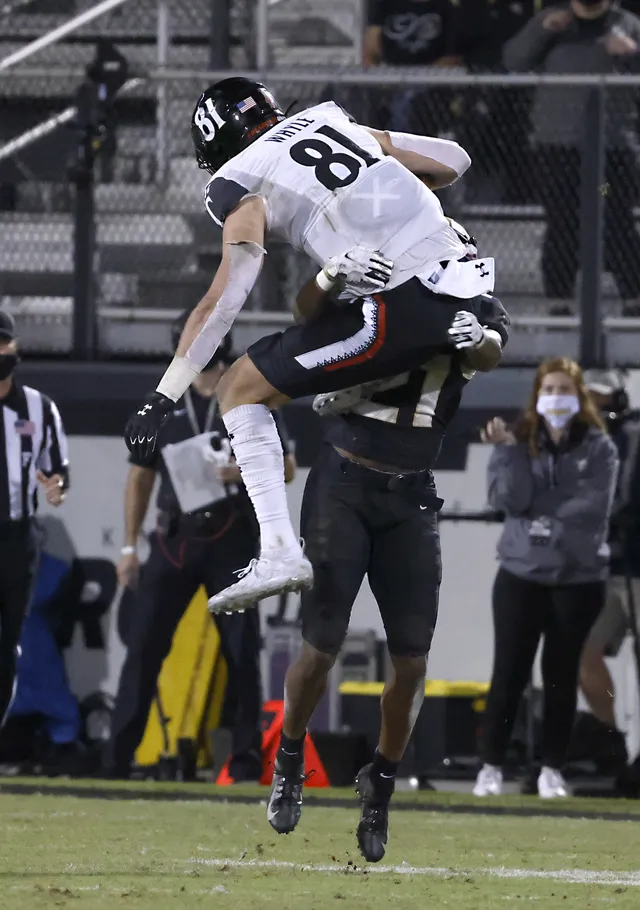 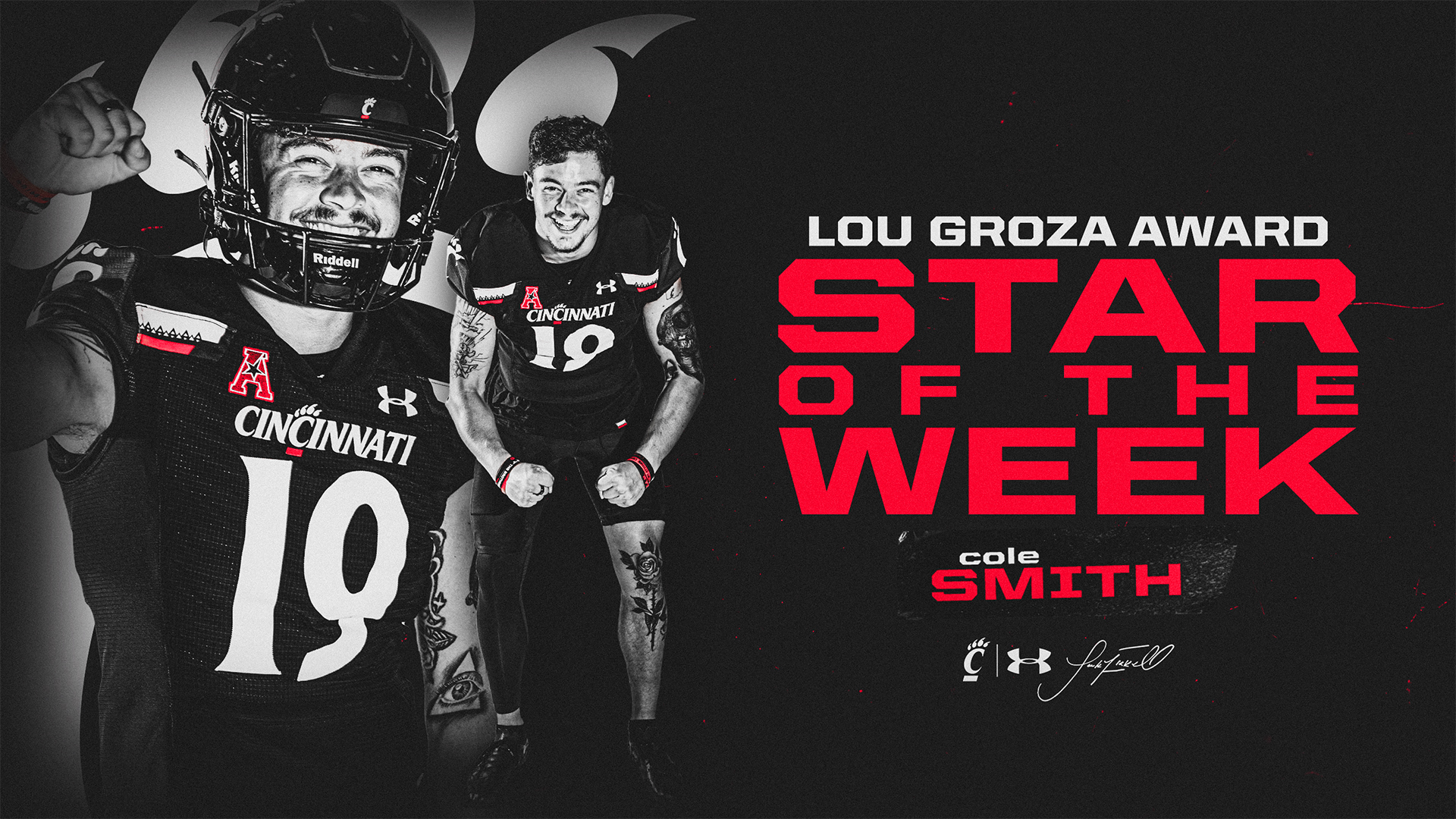 The Bearcats defense had another outstanding game, holding the Knights offense to 359 yards which is crippling compared to their 619 per game.  While they gave up 33 points, they held UCF to 6 “splash” plays which are defined as 15 or more yards per play, they average 13.  UCF lives and dies by these big plays and the Bearcats sniffed them out.  A big interception by Senior Derrick Forest in the Fourth Quarter led to a TD which gave the Bearcats the lead that they never surrendered. 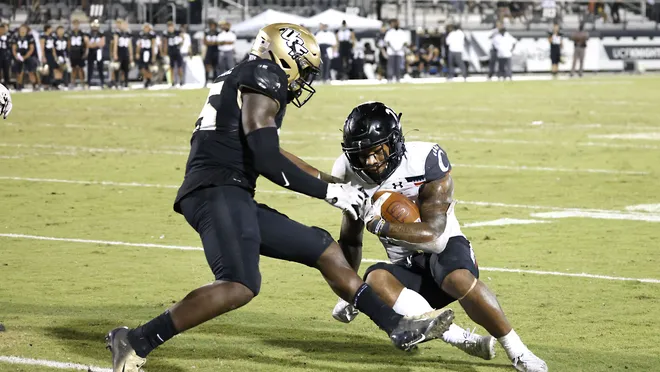 Nice Set of Hooters You’ve Got There
This week’s game against the Temple Owls has been cancelled.  There are some COVID concerns with both programs. 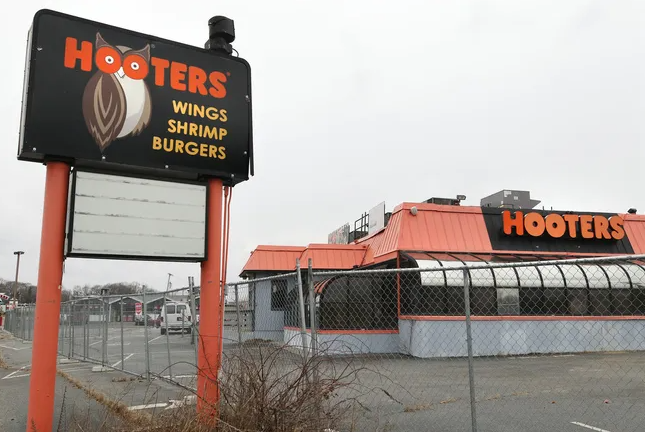 This cancellation has punched our ticket to the AAC Championship Game on 12/19.  The Bearcats, as of today, do not have any game until 12/12 until we play at Tulsa.  This is a weird year, so that could change.
Remaining Schedule:
12/12 – @ Tulsa if Tulsa wins out, this could be a primetime game, currently the only top 25 Match-Up for the week
12/19 – AAC Championship Game – ABC 8:00 PM – If we win out, this game is at home, if we lose to Tulsa on the road, it’ll be at Tulsa.
Show Me The Money
The Virtual Sell Out is still on until 11/30.
Virtual Crosstown Shootout – you get a T Shirt and a Cardboard stand out in the stands.
Basketball Schedule Released Last Friday
Juncta Juvant!