After a rough start in Raymond James Stadium the Bearcats dominated the first half, allowing less than 75 yards of offense going into halftime up 31-7.  The Bulls were the benefactors of an early Des Ridder turnover that allowed them a shortened field for a score.
The Bearcats finished the game with a 45-28 victory that got a little too close for comfort once again, until Ryan Montgomery got some style points with a 55 yard touchdown with 1:22 left in the 4th Quarter.  The 17 point road victory helped the pain of the $14.50 Budweisers at Raymond James Stadium.

Hats off to the Bearcats run defense, who finally got things right, holding the Bulls to 101 rushing yards on 38 attempts who averaged 2.7 yards per attempt.  The Blackcats defense tallied 4 turnovers on the day, with 2 interceptions off freshman QB Timmy McClain and forcing 2 fumbles.
Des Ridder had a great day under center after a shaky start, going 31/39 for 304 yards and 2 TDs after his interception in the first quarter.  The Bearcats rushers garnered 202 yards on the ground with stud running back Jerome Ford dressed in case of emergency, but he didn’t take a snap, resting up for this weeks game against the Mustangs.
Pony Excess 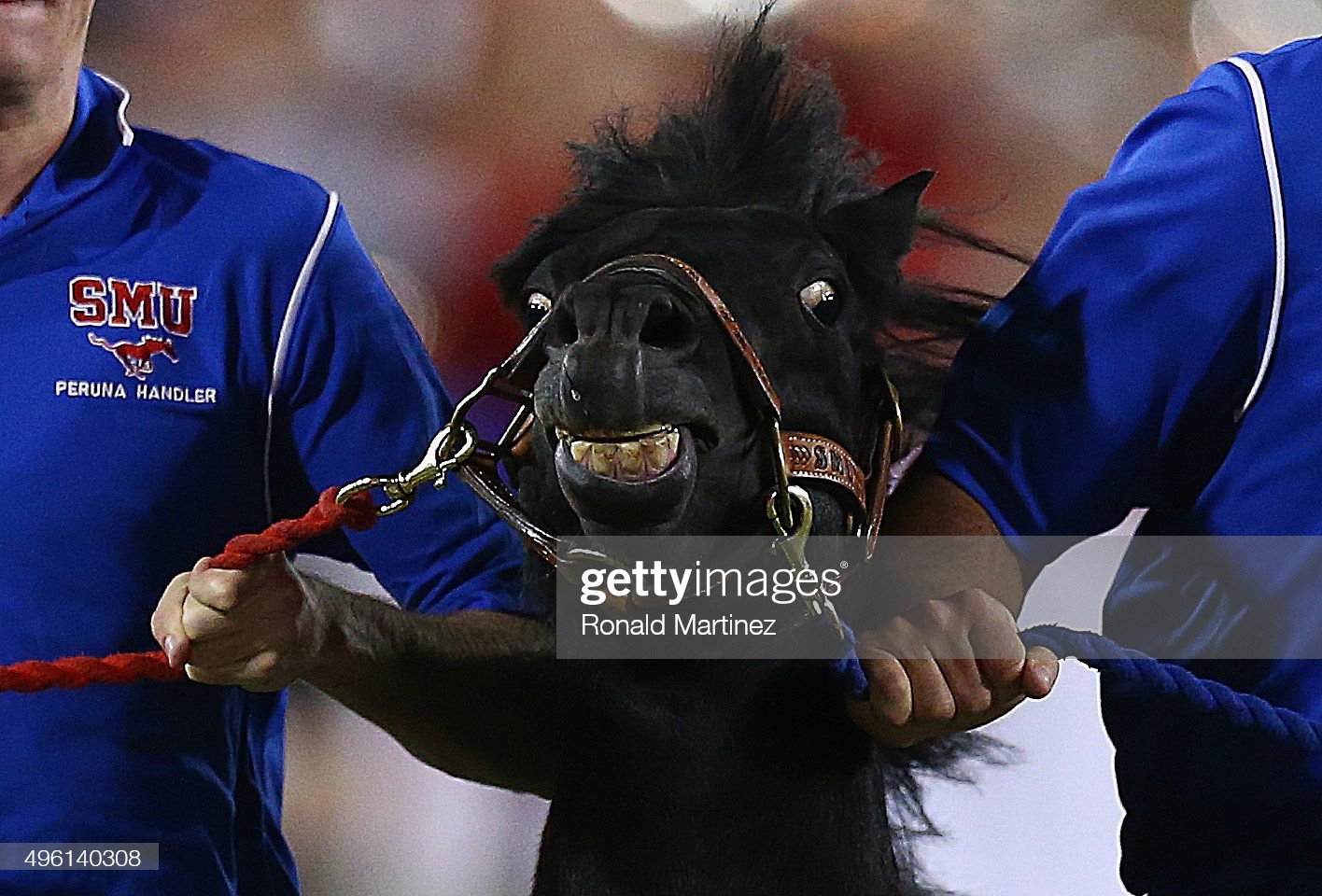 This week’s opponent, the SMU Mustangs who are the only team in NCAA to receive the “Death Penalty“, come into Nippert Stadium for what most thought would be the first of two match-ups between the Mustangs and Bearcats this season.  Unfortunately for the SMU faithful, the Mustangs dropped two games in a row and barring chaos for Houston, will likely be their only visit to Cincinnati this year.  The Mustangs enter this week 8-2, the team with the second best record so far on the Bearcat schedule behind the #8 Irish.
The Bearcats and Mustangs have played 5 times, with the Bearcats holding a 4-1 record, their only loss being in 2017 in Luke Fickell’s first season.  UC and SMU played last season in Desmond Ridder’s coming out party.  Unfortunately this happened at the Mustang’s expense, as he rushed for 179 yards and 3 TDs including a 91 yard dash to the endzone en route to a 42-13 victory.

This year SMU comes into Nippert Stadium seeking vengeance on Senior Day in which allegedly 33 players will be honored prior to the game.  Coach Fickell said on his Radio Show on Wednesday that while 33 players will be honored, he does expect some of them to use their COVID year of eligibility to return.  Regardless, this is one of the best classes of Bearcats to ever graduate from the University of Cincinnati and will likely see the most Bearcats of all time drafted in the NFL Draft in April.  If you can, make your way into the stadium early to celebrate this amazing Senior class.
SMU QB Tanner Mordecai, a former Oklahoma Sooner, is one of the best QBs in the Nation.  He enters this weeks game #7 in passing yards in the NCAA with 3264 passing yards and is #2 in the country in passing TDs with 37.  However, his downfall is one of the Bearcats strengths, as he’s tied for #5 in the country with 10 interceptions.  He throws the ball around 40 times per game and that doesn’t bode well for the Mustangs.  While Mordecai has a lot of arm talent, he makes a lot of mistakes and I look for that to continue this week against the Blackcats defense.  SMU ranks #61 in the country in rush offense, which is middle of the road.  Ulysses Bentley is their main RB, but has been dinged up over the past few games.  If the Bearcats can keep Bentley and his counterpart Tre Siggers in check, they should be able to force Mordecai into mistakes in the Redzone to keep the Mustangs from scoring.
Defensively, SMU isn’t very good.  They rank #85 in overall defense, but their rush defense ranks #30 in the NCAA averaging about 126 yards per game.  Their pass defense is abysmal, ranking #121 in the NCAA at 280 yards per game.  With the way Ridder has been playing the past few weeks and having not played an elite RB like Jerome Ford, who should be back for this week, SMU is going to have their hands full.  They do have a few skill position players on the defensive line that generate a lot of sacks and tackles for loss including Turner Coxe and DeVere Levelston.  I look for Ridder to have another strong game.
The Bearcats have been getting the best of each of their opponents this season.  They’ve needed big wins and “style points” to put their best foot forward in getting into the CFI, but ultimately it hasn’t mattered as they’ve gotten wins when it matters.  The Bearcats are going to continue their undefeated ways.
Bearcats – 35
Mustangs- 24