After showing the Tulsa Golden Hurricane that we wanted all of that smoke, the Bearcats return to Clifton with all the pomp and circumstance surrounding Homecoming. After destroying QB Davis Bryn, the Bearcats continued their defensive evolution, allowing only 21 points and 2 interceptions against one of the top QBs in the NCAA, despite an ankle injury. The Bearcats returned to the AP Top 25 coming in ranked #24 and just out of the Coaches Poll at #26. This week a match-up against the USF Bulls looms on the horizon, a team that gave the Bearcats a scare in Tampa last year.

Bad News: Tulsa doesn’t have other throwback logos to work with…

The Blackcats made it clear early that they were going to pressure QB Davis Bryn and make it a rough night for him. 11 sacks and 4 QB hurries later, Bryn finished the night 18/36 for 237 yards and 2 interceptions. Bryn was constantly under pressure with 10 different Bearcats getting at least a partial sack. They added another 4 Tackles for Loss to the tally, almost completely shutting down Tulsa’s running game. After removing the sacks, the Bearcats still only allowed 108 yards on the ground.

The front 6 of the Bearcats have been wreaking havoc on their opponents and while I don’t think they are as good as last year’s team defensively, they have a different kind of edge. The Pace Brothers were the stars of the show, with Deshawn Pace making an early house call in the first quarter and Ivan continuing his dominance with 10 tackles, 1.5 sacks, 2.5 tackles for loss, and a pass defensed. Ivan is tied for #6 in the NCAA with 5 sacks on the season and leads all players in the NCAA with 12.5 tackles for loss, with the next closest guy having 8.5. A lot of people knew that Pace would contribute, but it would have been foolish to think he would have been this elite.

The offense continued to be solid. Bryant had a solid game passing the ball, going for 166 yards and 2 TDs, along with one interception. Tyler Scott ended his 100+ receiving yard stretch only finishing with 77 yards and a TD. The running game had a solid game rushing the ball, going for 198 yards and a TD, but 112 of those yards came on 2 plays. Two long rushes that would have been Jerome Ford TDs, shows that we lack the elite speed at the running back position we had last season.

On a side note, the game itself was absolutely miserable to watch, bad camera work, 10 official reviews, and a clown of a referee who was clearly trying to see how great he looked on television marred the victory. The Bearcats left Tulsa, hopefully for the last time with an 18-17-2 lead against the Golden Hurricane.

The Bearcats took a 31-7 lead early in the 3rd Quarter that saw Desmond Ridder take the all time passing TD record from Offensive Coordinator Geno Guidugli. However, the Bulls stampeded back from that deficit behind freshman QB Timmy McClain who had an 80 yard TD pass to Joe Horn Jr and added a 2 yard rushing TD, getting the game within 10, as the Bearcats entered the 4th quarter with a 38-28 lead. Ryan Montgomery took a 55 yard rush to the house late in the 4th to send the Bearcats home with a win on their path to the CFP. McClain looked like a solid prospect, but USF recruited former Baylor QB Gerry Bohanan and McClain took his talents to Orlando to join the Golden Showers, I mean Golden Knights.

This years South Florida Team hasn’t gotten off to a great start and things aren’t looking optimistic for them as they make their way to Clifton to play a Bearcats team on Homecoming weekend. In fact, USF is so bad, that our game will be at 2:30 PM on ESPN+, a weird kick-off time. USF threw their first TD pass of the season last week, in their 5th game, with QB Gerry Bohanan setting a season high in passing yards with 252, 3 TDs, and no interceptions in a 48-28 loss to ECU. The Bulls will walk onto the field at Nippert Stadium 1-4 with their only win against the Howard Bison a Division 1-FCS team. 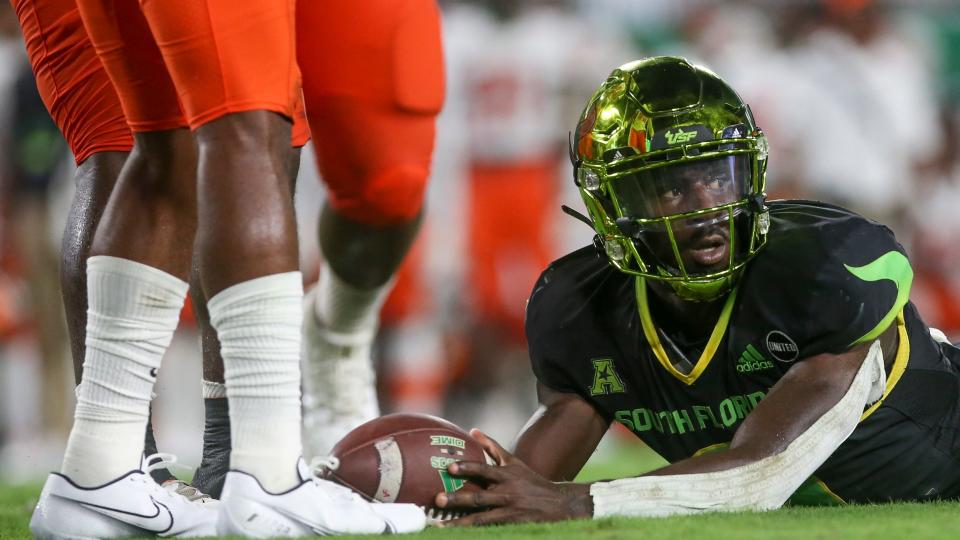 The Bulls offense is pretty anemic, 102nd in the NCAA in yards per game at 356.6, 101st in point per game at 24.4. Their rushing offense leads the way with 12 TDs, trying their best to offset Bohanon’s 3 TDs and 6 interceptions on the year. The Blackcats defense has really improved on run defense, and if they continue down the same path USF is going to struggle to string drives together with Bohanan taking snaps. He does have some rushing ability as he’s 2nd on the team with 210 yards. Apply pressure and force him into mistakes and the Bulls will be Steers by the end of the game.

As poor as the Bulls offense is, their defense said “hold my beer, watch this”. The Bulls are 127th in yards per game allowed, averaging 487. Teams are converting those yards into points, averaging 38 points per game, which is 122nd in the country. It’s looking like it’s going to be a rough day for head coach Jeff Scott trying to defend this Bearcat offense. Will he go the Indiana route and sell out on the run and allow Tyler Scott to blow by his defense all game? Or will he try to slow down Ben Bryant and open up the rushing game for Corey Kiner and Chuck McClelland. The Bulls have 7 sacks on the season, less than the Bearcats had last week alone. Either way, the cannon might get worn out in the South Endzone.

Vegas has the Bearcats winning this game by 27.5, it’s a big spread, despite the fact that USF isn’t that good, it’s hard to win conference games by that many points.